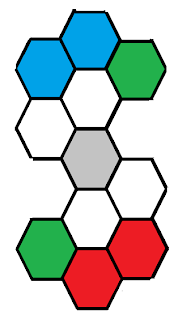 Each Hex counts as a zone.

Generator Zones (Green):  Teams orb generator zones are the green zones next to the teams starting location.  Any player on team may generate an orb as an action.  A team may only have one orb at a time.

Random Hazard (Grey):  Roll on the chart below with one fate die to decide games hazard.

+ Regeneration:  Take an action, reduce one moderate consequence to a minor one.
0  Shifting mirrors:  Make a notice check to leave zone.
-  Shock Bolts:  A shoot 2 attack against all who enter zone.