Components of a faction

Description:  The story and motives of the faction in question.

Unit Frequency:  What professions the faction can deploy and how often.  Common are unlimited, Uncommon must be less units then Common, and rare is a single unit of that profession.

Faction Flaw:  A technique that is weakened by the practices and teachings of the faction.

Faction Edge:  Techniques that the faction excels at.

Rank boost:  Bonuses for the rank the unit is assigned.


And now some sample factions.


Order of the Magi Knights

Description:  The Order of the Magi Knights follows a code of honour like most knightly orders.  Most members of the order posses at least a slight hint of magic and their magical strength rises as their ranks do.  The highest members of the Order can use their physical combat skills with the same ease as their magic, interchanging their use of them in the midst of battle with very little difficulty.

The Order of the Magi Knights has it's stronghold within the Brilliant City.  The city is a beacon of magical study and is characterized by the many towers that make up the city itself.

So what is Fate War.  I am hoping it to be a setting and sub system of fate that focus on Skirmish battles.  Each player would select or create a faction.  The unit cards, the ones I have been featuring are selected and granted a ranking (Light, Medium, and Heavy).  Based on the faction this would grant boosts and determine the amount of stress the unit could take.  There would also be champions that would add another level of army building.  But more on that later.  Here are some more cards.

Two more unit professions for my fate war.  Some rules coming soon, though I will note it uses a very modified version of FAE and will be a war based game.  One big question though.  Which background looks better?? 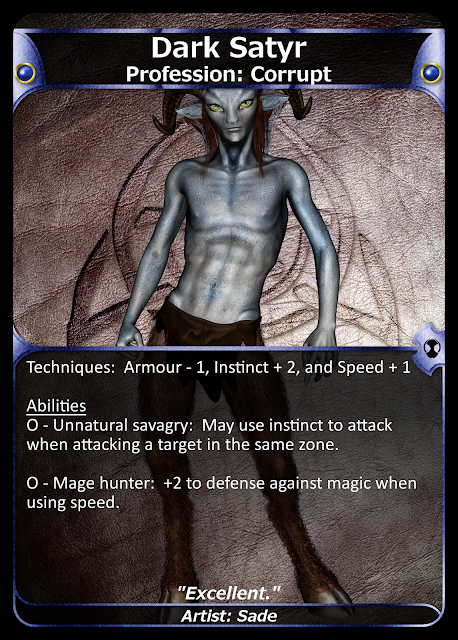 Techniques are approach, my current list is;  Armour, Instinct, Magic, Skilled, Speed, and tactics.  Considering others like Technology and stealth, but not sure yet.

Note:  Background by goldentiger for magic circle, Sade for the leather back, and I would like to thank  Christopher Stilson again for his amazing template.
Posted by Oniwolf at 00:30 2 comments:

So trying a new format for my rpg contests on the site.  This one will work as follows;

1.  Minimum 250+ words that are system neutral.  There are no stats required, though you can tack them on afterwards to any rpg system if you wish.

2.  All entries are to either be submitted by email to oniwolf2000@gmail.com, or in the comments of this post.

3.  All entries must have a name and email or link to blog.  These will be private, unless you want them public.

4.  Once contest is complete all entries will be placed in a pdf for free download.

6.  Public voting of the winner will take place on this blog after submission date.  Be sure to subscribe to blog by email located near the top so you don't miss out.

Items of power can be anything from magic to super science depending on the setting.  What makes them stand out are their abilities and sometimes histories.

Important Note:  Entries are the product of the creator but will be showcased in the free pdf and any other future free compilation of contest entries.

Contest is over.  View the entries and vote here.
Posted by Oniwolf at 08:42 5 comments:

Tuesday Fate War - Something that will be showing up Tuesdays from now on I hope.

I really want to nail down a weekly rpg feature, but not sure what people out there need.

Thoughts anyone?
Posted by Oniwolf at 11:51 No comments: